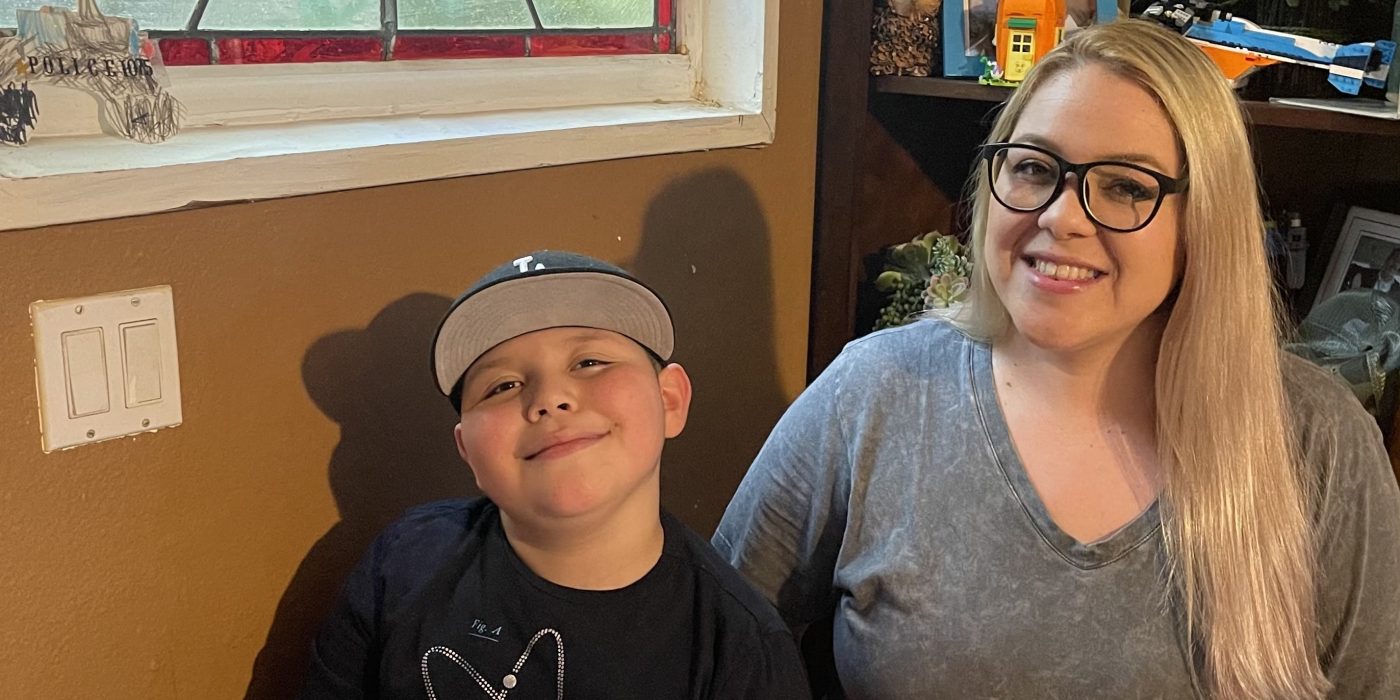 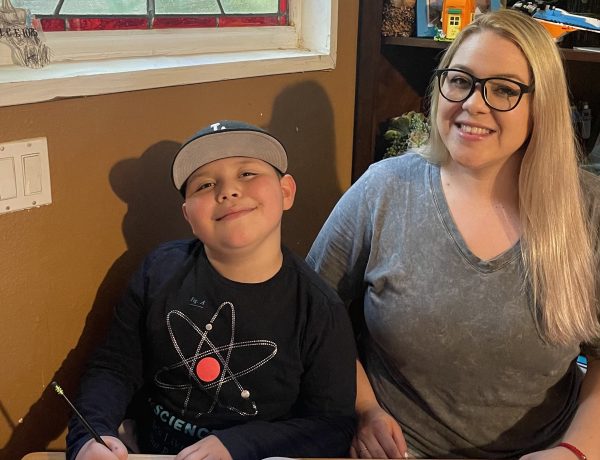 A Day in the Life of a PCC Student – Susana Macias

Susana is sitting under the jacarandas in her parents’ backyard, glancing occasionally past the camera as she watches her eight-year-old son, Leonardo, kick the ball around. She apologizes in advance—“I may have to pause from time to time and tell him to behave.” But aside from some minorly hilarious interruptions, the Zoom meeting carries on without a hitch.

What is your PCC story?

I am a second-year psychology student planning to graduate in Fall 2021. There was a big gap in my education—basically, I took a break after I graduated high school in 2003, met my ex-husband and my son’s father, started college at Glendale Community College, dropped out, tried again a couple years later; then we moved to Mexico for seven years, and then after the divorce my son and I came back to the States and I decided, hey, it’s time I got my degree.

I chose PCC because my younger sister went there, and she loved it. Now, both my boyfriend and my nephew are Lancers, too. PCC is educating my whole family!

What is it like being a single parent and a full-time student?

Hard. I’m not working currently. I was working at the Boone Gallery, but unfortunately there’s no work study right now. So my son and I are living with my parents in Silver Lake. And like me, he’s doing school remotely. The problem, though, is that he has ADHD. I basically have to sit with him the whole day to keep him on task. Usually in school, he would have someone who sits next to him and helps him. He’s not always able to function without some supervision because his attention can be all over the place. He just goes into these modes where he loses focus. I mean, it’s incredibly difficult for normal kids to focus on school when there’s a million things going on at home. It’s even more so for Leonardo.

So when do you get the chance to focus on your schoolwork?

In the early mornings. I typically wake up around 6 a.m. to do homework. That’s the golden hour for me; it’s when the house is quiet. I’ll usually get around 2 hours of homework time in. Then, when 8 o’clock rolls around, it’s all about waking up Leonardo, getting him dressed, brushing his teeth, making him breakfast, getting him situated at the dining room table and ready for class. His day starts at 9 a.m. and lasts until 3 p.m. 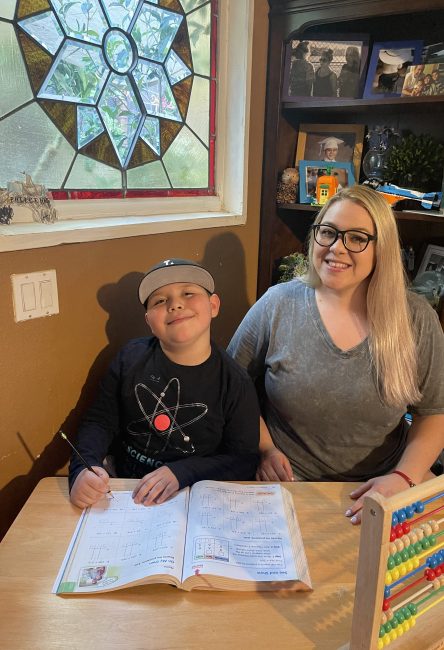 I try to sneak in a couple minutes of homework when I can…sometimes I’ll catch up on emails…but mostly my attention has to be on Leonardo’s school. His teacher will need something, or the batteries will be dying and I have to hurry to replace them, or Leonardo needs water, or a snack, or whatever.

Mondays and Wednesdays are particularly rough because I have class, too. So while Leonardo’s learning multiplication tables, I’m over here trying to comprehend Freudian theory. It’s definitely challenging when you constantly have your focus split.

That all sounds hectic – do you and Leonardo ever do anything to help yourselves release all that stress? You know, for fun or self-care?

The best thing for Leonardo is physical exercise. He’s always been into sports—basketball, soccer, karate. Swimming is his thing; he loves the public pool. He and I used to go hiking together a lot. But that was all pre-COVID.

Now that we’re home all the time, we’ve been doing a lot of Fortnite dances on Youtube. I’m learning that I have no hand-eye coordination—and I took Zumba for years! But for him, physical activity is so important. I read somewhere that having an ADHA child is like having a Lamborghini with Honda brakes. So yeah, there’s always a point in the day where you get a full-blown Leonardo. High energy, all over the place. Unless you give him the chance to blow off that steam, you’re not going to get anything done.

And for me, I actually really like being in class. We read some incredibly difficult texts, so I like being part of the discussion and asking questions. It helps me retain the information. Besides, I love having that human interaction right now, even if it’s the virtual kind. So that’s something I consider a form of ‘self-care’ for myself.

Why is getting a college education so important to you right now?

It’s about personal achievement. I want to prove to myself I can do it. I didn’t have wonderful grades when I was in high school. But it wasn’t because I couldn’t get good grades, it’s just that I didn’t have the motivation back then. So this is ultimately about me setting my own bar and personal expectations.

But also, it’s for my family. I have an older and a younger sister, and out of the three of us, we all attempted college but never received a degree. My parents didn’t get past middle school. And Leonardo is still young enough to where he’s looking at me as a role model. It’s the whole American dream, right? You want a better future for your children, you want to achieve something great.

And besides, I’m fascinated by the brain and human behavior. I’ve always wanted to have a better understanding of others and why they think the way they do. But mostly, I’m interested in understanding myself.

How has PCC helped you on this journey?

PCC and the Foundation have been my saving grace through this whole thing. I feel like my hard work is being acknowledged—and by people I don’t even know! When your friends and family acknowledge your work and praise you for it, it’s meaningful. But when a complete stranger invests in your success because they believe in you, that’s rewarding in a way I can’t even explain.

Receiving scholarships and having professors and fellow classmates reach out and offer their help and support…it’s the best feeling. It reaffirms that I’m on the right path. It gives me more motivation to keep going.

What does Leonardo think about being in school alongside his mom?

He’s an old soul, so he gets it. Most of the time I’m the one keeping him on task, but every now and then, I’ll get a reminder from him—“Mom, get off Facebook, we need to get back to work!” He’s got my back just as much as I got his.

I want to show him that it’s never too late to pursue your goals. That’s the other thing about why I’m at PCC right now. Some people might think I should delay my education until Leonardo is older, until he’s back in school, until the ‘time is right,’ or whatever. But I want to prove to him that there’s no timeline on your education. School is always going to be there for you. And Lord knows PCC has been there for me.