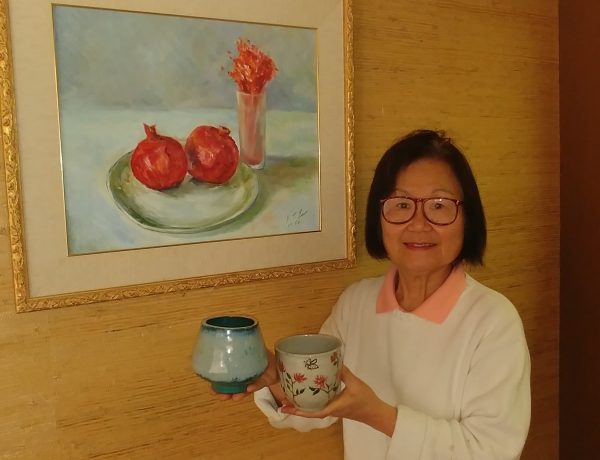 If you were to visit the USC Pacific Asia Museum in Pasadena, it’s quite possible that your tour guide would be Nancy Lan, former Kent State and PCC alum, retired molecular biologist, and current art history connoisseur.

“I was born and educated in Taiwan,” Nancy begins. “I came to the U.S. because I wanted to go to graduate school. My parents used to tell their children that, in Taiwan, we were like frogs in a well, and we must jump out to see the world. And while I didn’t know much about the U.S. school systems at the time, I chose Kent State because I had a college classmate going there and the school offered me a scholarship.”

It was at Kent State that Nancy earned her Ph.D. in biochemistry. She would later go on to do a postdoctoral fellowship at the University of Illinois at Urbana-Champaign before moving back to California, where her parents hoped to immigrate. And as it happened, a research position opened up for her at the University of California Medical School in San Francisco.

“And that’s how I ended up as a gene-splicing molecular biologist,” Nancy explained.

Nancy’s research at UCSF focused on understanding the mechanism of hormone action, as well as the potential role hormones play in hypertension.

After several years in San Francisco, Nancy met her husband, Dr. John Hall, and together they relocated to Pasadena, where John had taken on a position as an engineering professor at Caltech. It was there that Nancy would begin to research the human immune system in an effort to understand how it works on a molecular level. Eventually, Nancy would find herself working as a research associate professor at USC and later as a researcher at a small pharmaceutical company, helping to discover and develop a new class of medications for epilepsy, anxiety, and other neuronal diseases.

Science has been a focus of Nancy’s for most of her career.

But amidst all her successes as a biological researcher, Nancy couldn’t shake the feeling that something was missing in her life.

“Throughout much of my adult life, my father was an artist,” she said. “Even though I had a lot of opportunities growing up, I never thought I had the time to understand art.”

In a competitive field like molecular biology, Nancy often found herself working long and exhausting hours. This made the pursuit of art, regardless of her interest level, impossible.

It wasn’t until her father passed away in 1997 that Nancy decided to make a change.

“I never had a chance to talk to him about his art,” Nancy said. “When he was alive, he always told me that art was very important in life, in addition to career. To understand art and culture is to enrich one’s life. This always stuck in my mind.”

By this point in her life, Nancy was feeling quite accomplished in her career. She’d had many successes in her education and professional research. And so, after her father’s passing, she decided to retire early.

“I felt that I needed to know about my father’s world,” she said. “I signed up for an art history class at PCC. It was something I needed to do for myself. I felt that art was a world I did not know, even though I was always so close to it. And PCC provided me with this great opportunity.”

Between 2005 and 2006, Nancy took all but one of the art history classes PCC offered—and she earned all A’s! This change sparked a fire in her. She was a student again; she was honoring her late father; she was exploring a new world, one full of possibility.

It was during her studies that Nancy found a series of old video cassettes in the PCC Library. The videos featured lessons and documentaries about the major art eras, art styles, and artists throughout history. They helped her extensively in her classes, especially when it came to writing those pesky art history essays. Unfortunately, the library didn’t have the complete video sets to view. And Nancy sought to rectify this.

“I was very happy I was able to watch all these old VHS tapes,” Nancy explained, “but I would have liked access to the entire series.”

When Nancy finished her PCC education in 2006, she wrote a check for $1,000 to the PCC Library and told them to buy the complete video sets so that others could enjoy them, just as she had.

At the time, that was the last connection Nancy had with PCC. She went on to volunteer as a tour guide at the USC Pacific Asia Museum in 2010 and eventually became the Docent Counsel Education Chair, developing the education program for the museum’s docents.

It was in 2017, however, when Nancy received an invitation to a PCC Foundation Hometown Legends series event. These events reach out to people who had donated to the college in the past.

“It was over 10 years ago that I left the college,” Nancy said. “And then I got an invitation to this event. That’s when I reconnected with PCC.”

As it happened, Nancy worked with PCC Foundation board member Sandra Chen Lau at the museum. When Sandra became the college’s trustee, her board member seat was vacated, and she recommended Nancy to fill her spot.

“And that’s how I became a Foundation board member,” said Nancy.

Today, in addition to her role at the museum and as a board member for the Caltech Y, Nancy finds herself re-immersed in the PCC community. She has big goals to reach out and assist students in their college education and being a Foundation board member will give her the opportunity to do just that.

But perhaps Nancy’s greatest goal in life is to continue exploring the world of art—the world her father left for her, and the world she discovered she loves.

“I was only at PCC for a brief time,” Nancy said, in closing. “But the college made a big impact on me; it gave me exactly what I needed at the time. Now I have this totally different life, and I’m happy to have had this opportunity. I would not trade it for anything.”

PHOTO CAPTION: a photo of Nancy with some ceramics she made. While studying at PCC, she thought it would be good to also practice some art-making, even though she knew she did not have much talent there.  Nancy enrolled in an adult ceramics class (elsewhere) and has loved it ever since. The painting on the wall is one of her father’s pieces.