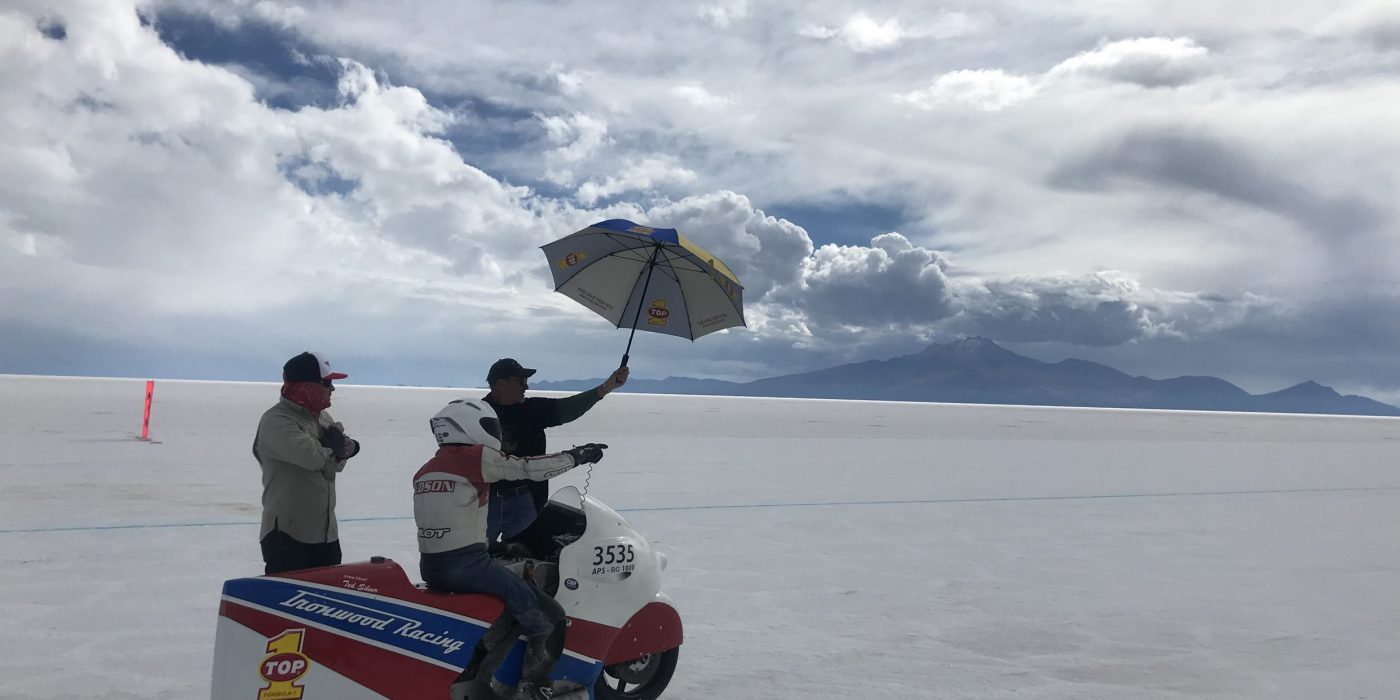 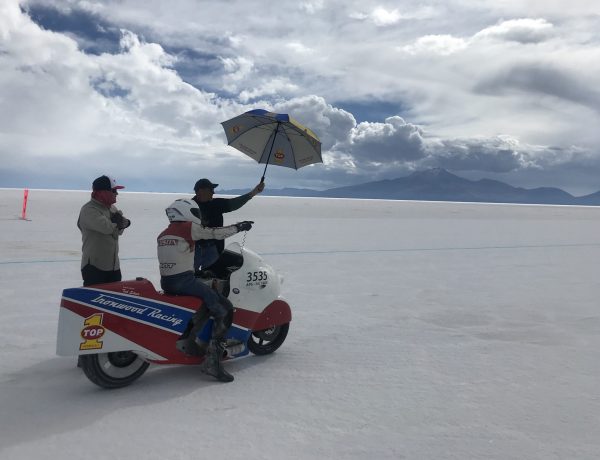 Until his death at 69, PCC alumnus Ralph Hudson was at the apex of his career.

For years, he worked as the general shop manager for a company that built custom creations, such as floats for the Rose Parade®. Prior to that, he’d been building TV production sets and serving as a prop master for the commercial and film industry. And in 1997, he founded the Glendale specialty fabrication shop, Ironwood, where he spent almost 25 years overseeing the creation of custom installations for theme parks, museum exhibits, trade show booths, public spaces, and parade vehicles.

“He grew up building things,” said his son David. “He and his childhood friends would buy old parts from cars and motorcycles and make dune buggies. Then they’d take those dune buggies to the coast and ride around in them.”

Described as a man with a “brilliant mechanical mind” by his close friend Linda Dryer, Ralph had a rare engineering inventiveness that made him not just a builder but an artist.

“He could build and engineer virtually anything,” Linda said. “One of the things he was most proud of was a Honda-sponsored float for the Rose Parade one year. He designed a roller coaster that did a full loop on the float. Everyone said from an engineering perspective it wasn’t possible. So he went and did it.”

It was Ralph’s passion for motorcycles and land-speed racing, however, that stole his heart. He began racing motorcycles at Bonneville in 1971, took a three-decade hiatus after his son David was born, and returned to the sport in 2006.

“Motorcycles were his passion,” David said. “Since the 1970s, he had this idea about how to build the body of a motorcycle in order to make it more aerodynamic. This became his passion project later in life: setting all these records on the bike he built on his own.”

Indeed, Ralph broke dozens of world records in land-speed racing over the past 10 years, including his most recent records of 289mph in 2017 and then 304mph a year later in 2018—notably, the fastest land speed record on a conventional motorcycle.

Tragically, while competing at Bonneville Speed Week in August 2020, Ralph suffered a crash after an unexpected gust of wind caused him to lose control of his bike. He passed away three weeks later as a result of his injuries.

“After his accident, Linda and I were together, and we were talking about things we could do to honor him and extend his legacy,” said David. “That’s when we thought of PCC.”

Between 1969 and 1970, Ralph was a computer science student at PCC. Although he left the College without completing the program—and would jokingly remark “Maybe I should have stuck with it” throughout his life—PCC had always been a significant part of his local community.

“He had an appreciation for PCC,” David said, “but specifically, he had an appreciation for education. My dad was a very generous person; he was a natural teacher, and he loved showing people how to do something, how to make something, how to design it so that it would work. In many ways, his legacy is not just his land speed records but his efforts to pass along his knowledge and skills. He got such joy out of teaching.” 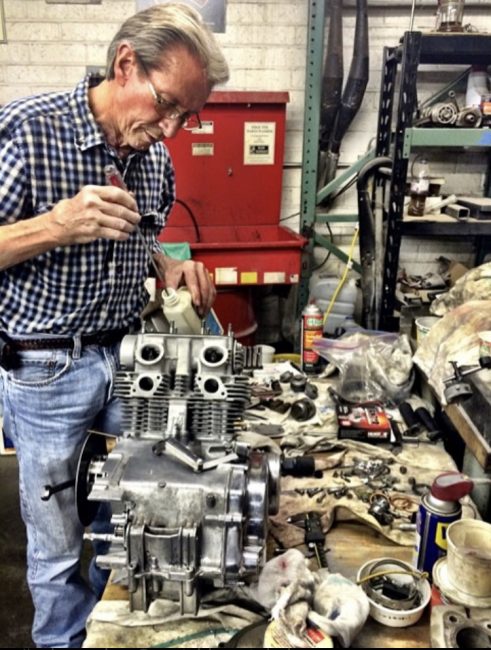 Like many artists, Ralph was concerned about what particular kind of artist he was, and what his contribution to the community would be. What he expressed in his custom creations and mechanical inventiveness was a passionate vision of what could be: a tire that could role on its own or a giant pineapple that would open up to reveal perfectly sliced wedges inside, for instance.

“One of the biggest challenges he had for many years was finding people who could actually build the projects his company would be working on,” David said. “For him, it was hard to find good carpenters, good metal welders, and good painters. He would often get frustrated with the lack of qualified people.”

Ironwood was founded on the philosophy that good design comes from having high standards for quality craftmanship, and it is this that David and Linda wanted to uphold in Ralph’s honor.

“It remains a constant problem to find people with good manual skills, not just in engineering but in an artistic sense, too,” said Linda. “Ironwood needs highly skilled and competent people, and PCC is the perfect place to promote this kind of education.”

In September 2020, David and Linda met with the PCC Foundation’s Director of Development Dolores Ybarra and established the Ralph Hudson Skilled Trades Fund at PCC, which is a $53,000 endowment that will award $1,000 per recipient.

In their research, they discovered that not only is tuition a challenge for many PCC students, but some students graduate from their respective programs and can’t afford the gear needed for employment in their field.

“That made me cry,” Linda said. “It’s so sad and frustrating to think that it’s a lack of funding that prevents so many people from finding success. That’s why we put together this fund and it’s a good feeling to know that Ralph’s legacy is helping people and transforming their lives, while also promoting these skills.”

The Skilled Trades Fund is tailor-made for students who want to go into related fields, such as manufacturing, construction, engineering, technology, and design.

“Recipients of the award will be afforded an interview at Ironwood if they want one,” said Linda. “It will increase the number of candidates that are coming through the company’s doors and stepping into the local workforce, and we hope the award will target not only those with the need but those who are interested in doing this kind of work.”

“It’s a permanently endowed fund,” David said. “We’re really excited and proud about that; we wanted to continue to grow it over time and find ways to get the message out to people and empower those who have the potential for these extraordinary skills.”

Both David and Linda continue to be inspired by Ralph’s determination to improve the community, particularly in the context of quality craftmanship and taking pride in one’s work. He was loved by those he knew, and he was greatly admired by his contemporaries, both in the fields of mechanical engineering and land speed racing.

“My dad was always an extremely patient and generous man,” said David. “He taught me a lot, but I could never live up to his mechanical genius. I don’t know if anyone ever will. But his legacy of helping others and passing along his skills—that’s what we want to establish at PCC. It’s what he would have wanted to give back to the community.”

If you are interested in supporting the Ralph Hudson Skilled Trades Fund, please visit: give.pasadena.edu/Hudson