For the past nine years, Gloria Pitzer has devoted herself to creating new, sustainable relationships for Pasadena City College. In co-chairing the major gifts campaign with Jack Scott she helped to raise $16,000,000 for the College, far exceeding the Foundation’s $10 million goal and benefiting athletics, the arts, career education, scholarships and instructional support.

Now, in her second term as a Foundation board member and as the newly elected president, Gloria hopes to build on that success. 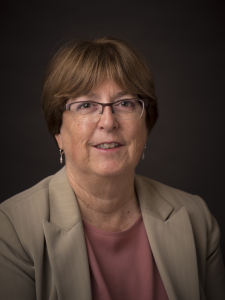 “We want to build up the Foundation’s capacity for fundraising,” she says. “There’s now a dedicated development and advancement committee, which wasn’t even a part of the Foundation a couple years ago. That’s a huge step forward! But there’s still a lot of work ahead of us when it comes to building our connections with the community.”

Gloria didn’t get involved with the PCC Foundation by accident. Growing up in Pasadena, she was always aware of the College and its impact on the community.

“I come from a family of seven children,” she says. “My siblings and I were certainly encouraged to get a college education. In fact, it was expected of us. But we also knew we wouldn’t be getting family support to cover the cost of that education.”

With her dad in the military, Gloria spent the early part of her childhood moving around. An army brat in the fullest sense of the term—“I was definitely a troublemaker at that age”–Gloria lived all over the map in her early life: Illinois, New Jersey, Washington D. C., and later in India and New Delhi while her father served in the ambassador court.

In fact, there’s a running joke in Gloria’s family that with so many children, traveling was a luggage-carousel-nightmare for their parents.

“There were thirty suitcases for us,” Gloria recalls, laughing. “Every stop we made, my parents would be counting out suitcases to make sure we had everything. Then they would do a headcount of us kids. Suitcases first, kids second.”

In 1963, her father retired from the military and the family settled in Pasadena.

“It’s where my roots are,” Gloria says. “Basically, from fifth grade onward, I was here in Pasadena.”

With it made clear to her and her siblings that they were responsible for making their own way through higher education, Gloria began to map out her academic journey early on.

“I knew that I wanted to go into law as early as junior high,” she explains. “And I knew I needed a bachelor’s degree to get into law school. So from there it was about figuring out how to reach that goal in the most efficient way possible.”

As Gloria says, PCC was the first and most sensible choice. She could get her first two years of college very inexpensively and transfer those credits to a four-year institution. And that’s precisely what she did. After getting her AA, Gloria transferred to Cal Poly Pomona, where she fulfilled her bachelor’s degree. Next step: law school.

“I went to Loyola,” she says. “And thankfully, those first two years at PCC enabled me to be in a really strong position going into law school—I didn’t have any student loan debt.”

Of course, it wasn’t just about setting herself up for academic success. Having known since the age of twelve that she wanted to be a lawyer, Gloria worked part-time throughout her college education. She’d written a number of Pasadena law firms upon graduating from high school in the hopes of “seeing how law offices worked.”

“I had very good typing skills,” she adds, “and a couple of the city’s cheaper law firms looked at me and thought, Here’s some free labor!”

For eight years, Gloria would study in the mornings, work in the afternoons, and attend classes in the evenings. She commuted every day from Pasadena. And by the time she graduated from Loyola in 1978, she knew all the ins-and-outs of practicing law.

With her law degree, Gloria went on to develop her expertise in probate, trust, conservatorship, and estate work. But the perspective she gained as a Pasadena resident, as a former PCC student, and as a certified specialist in Estate Planning, Trust and Probate Law who regularly sees the imbalances of the legal and social systems, stayed with her.

“Seeing how the Foundation can enable students who wouldn’t otherwise have an opportunity to excel and get a degree and put themselves in a position for a better life was something I wanted to be a part of,” Gloria says.

In her position as a board member, and now as president, Gloria is working diligently with the team to improve the Foundation’s outreach to the Pasadena community.

“Connections that translate to fundraising,” she says. “That’s what we need.”

With the College’s centennial just around the corner, the Foundation will undoubtedly have a major role in planning this celebration. And although the 2024 event will be two years after Gloria’s term as president, its planning stages will begin on her watch.

If you ask her, Gloria would tell you she believes the Foundation is in a really strong position, especially with Dr. Erika Endrijonas serving as president of the College. “She’s got some great connections that can only be positive for the Foundation going forward,” she says. “She’s helping us make the Foundation more visible in the community.”

But along with visibility, a primary goal for Gloria would be to focus on the sustainability of students.

“The Foundation’s done really well with tuition scholarships,” she explains, “but we’re seeing that the roadblocks many students come up against aren’t necessarily in the tuition at this point. The roadblocks are in the students’ abilities to live.”

Basic needs such as food, security, housing, and transportation are where the Foundation is looking to redirect its focus in order to support students.

“How do you go to school when you have an infant to care for, or when you don’t have means for transportation, or when you don’t have a place to live?” Gloria says. “The Foundation is beginning to look at the needs that aren’t really being met for students.  Ultimately, we’re trying to find ways to put students on a solid footing for their future.”

Crediting the Foundation’s most recent President, Bill Hawkins, for spearheading much of this new direction, Gloria says, “Covering people’s tuition is still important, but we need a more holistic view of what enables a young person to be successful in their college education, and this is definitely what the Foundation will be focusing on going forward.”

For Gloria, it’s about making a difference in someone’s life.

“It’s especially important right now,” she says. “In light of everything that’s been going on, the Foundation’s main challenge has been in identifying how the needs of our students have changed because of the pandemic and adapting our response to meet those needs. Needs that include things like increased access to technology, dealing with food and housing insecurities, and providing financial support to those who have lost jobs or other means of income.”

Gloria applauds the Foundation’s response to rally around PCC’s students and support them not only in their education but in their daily lives amidst the sweeping uncertainty of COVID-19.

“The staff came together and worked tirelessly and selflessly during an emergency situation to ensure students weren’t falling through the cracks,” she says. “That’s the kind of difference the Foundation makes in peoples’ lives.”

“If everyone had the attitude that they could make a difference in someone’s life and took an action that could improve the world we live in, one person at a time, I think we’d be living in a much better place,” she adds. “To the extent that we can help students and inspire some good in others, the Foundation is dedicated to improving the community of Pasadena. And I’m glad to be a part of it.”