In Memory of Lacreta Scott

On February 6, 2021, the PCC Foundation’s good friend, Lacreta Scott, passed away from complications of COVID-19. She was a caring teacher and advocate who touched the lives of many in the community. Specifically, she wrote a monthly column for the Pasadena Star News entitled “Life Lessons,” which ran from 2002 – 2007. She taught English at the college level between 1982 and 2002, and she was a partner with her husband, Jack, in his career as President of Pasadena City College, California State Assemblyman and Senator, and Chancellor of California Community Colleges. 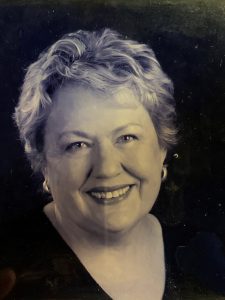 For a young Lacreta Scott—née Isbell—life took her across the country in ways she never imagined. Like her husband, she came from humble beginnings. Born on July 18, 1934, she grew up in the American Midwest. Her father was a Texas preacher, and she would often reminisce about how she and her brother, Allen, used to run barefoot around the churchyards on hot summer nights. Everything in her early life, she said, centered on the small Texas communities where her father held outdoor sermons, bringing people together through music and dinners and fellowship. Upon enrolling in Abilene Christian College in 1952, Lacreta met her future husband, Jack. The two were married just two years later.

It wasn’t long after Lacreta and Jack tied the knot that they left for Connecticut, where Jack studied at Yale University and received a Master of Divinity degree. For some years, they served churches from coast to coast, and in 1962, Jack joined the religion faculty at Pepperdine University—Pepperdine College, at the time—with hopes of fostering more diversity within the church. The Scotts were drawn to the far edge of America; two young trendsetters ready to inspire change in the City of Angels. And they had officially converted from Texans to Californians.

“So many faculty members became close friends while living on the old campus,” Lacreta said, recalling her and her husband’s time at Pepperdine. “We were so close because we all came from Texas or Tennessee.”

It was during these Pepperdine years, perhaps, when the Scotts developed their fervent support for education. Both Lacreta and Jack had their roots in Christian ministry and were always dedicated to helping the disenfranchised. But working in institutions of higher learning seemed to offer new ways of giving back to the community. As Lacreta once put it, she “never expected Jack to be in a position to help so many people.”

And she certainly hadn’t expected it of herself either. 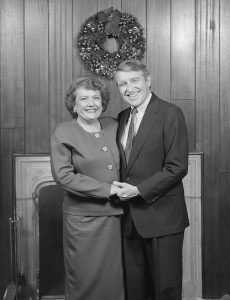 Alongside her husband, Lacreta was a gentle but passionate advocate for the causes she believed in. Education, of course, was always at the top of her list. As the valedictorian of her high school graduating class in Elk City, Oklahoma, in 1952, Lacreta went on to earn her BA from Pepperdine University and her MA in English from California State University, Long Beach. She was an English professor for 20 years at Cerritos College and served as the College’s Dean of Liberal Arts. She and Jack were also very active as philanthropists over the years and consistent champions for serving the needs of PCC and its students. In 2019, Jack and Lacreta were recognized by the Pasadena Museum of Art as Contemporary History Makers.

In addition to her unfailing support for education, Lacreta was a faithful advocate for gun control. After losing their son, Adam, to gun violence in 1993, she and Jack publicly supported legislation for stricter gun control in California. As then president of PCC, Jack led a Pasadena subcommittee on gun control, and Lacreta wrote letters to the mothers of local victims of gun violence, letting them know she shared their grief.

Of their marriage, Jack has called it a “loving counter-balance.” Through extraordinary successes and unimaginable tragedies, the Scotts have always prioritized each other and their children. And it is this—her family—that Lacreta valued most in life. She and Jack have five children between them: Sharon, Sheila, Amy, Greg, and Adam. They have 11 grandchildren and many great grandchildren. Adam preceded her death in 1993.

Bobbi Abram Executive Director of the PCC Foundation shares this touching tribute to Lacreta, a dear friend and longtime supporter:

“Lacreta distinguished herself in her love for her family. Especially in her later years when she depended on her wheelchair, she would still venture into the community to support Jack and graciously receive honors and recognitions bestowed on the both of them.  With their children accompanying them, it was easy to see why this family has meant so much to Pasadena and to PCC.  When Jack shared with me that Lacreta had passed away, he said, “She was the tops.  We were married 66 years.  She was as supportive and interested (in my life) as any wife could be.  While I was president of the college and in the legislature, my favorite part of the day was coming home to Lacreta –  sharing my day with her and getting her thoughts about the things that were happening.  The luckiest break in my life was getting to marry her.”

Bobbi added, “Today, the entire PCC family feels like we had a lucky break having Lacreta in our lives.  She was universally loved by all who had the honor and pleasure to know her, and she will be greatly missed.”