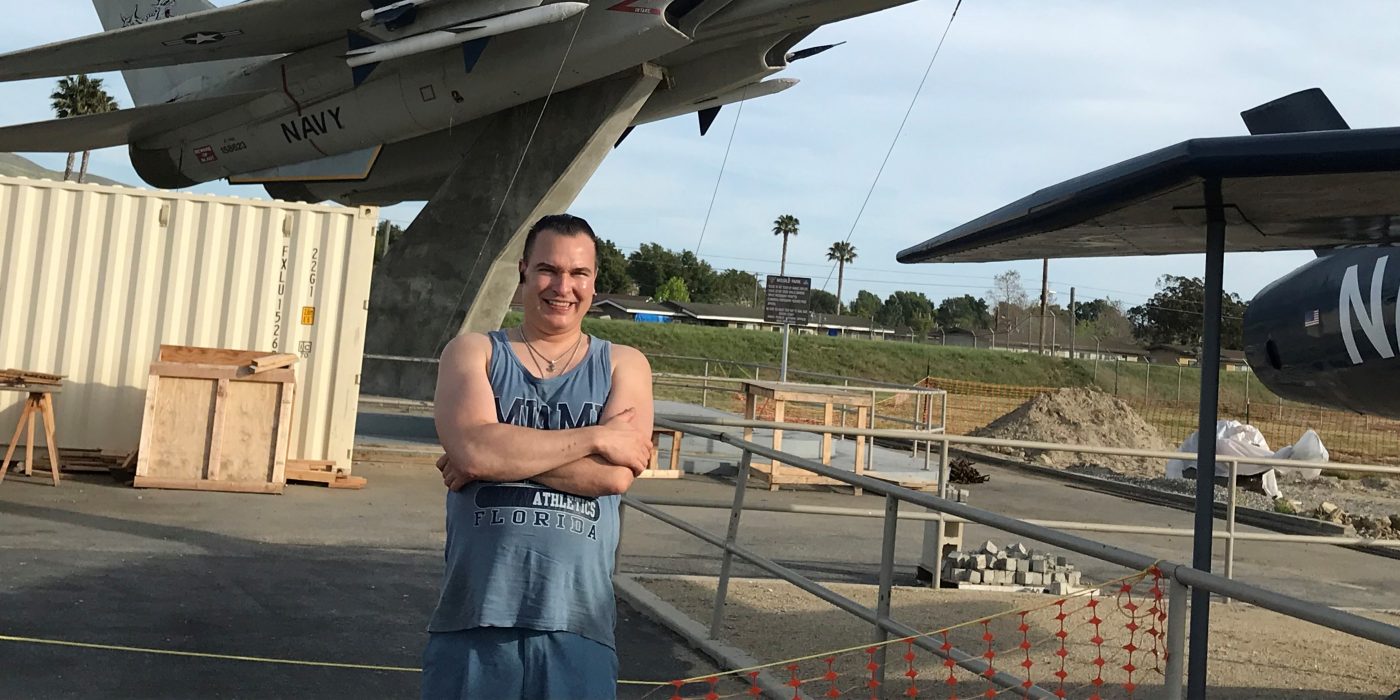 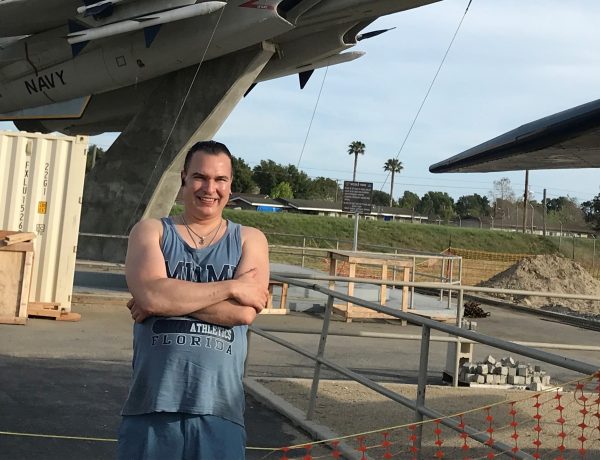 His name is Clifford Larsen—Cliff, for short—and he was born in an old factory town in South Boston, near Dorchester. His mother was a secretary, and his memories of her and her fighting spirit come back to him in easy recollection: a trip to Radio City Music Hall one Christmas, a lecture on why you should never chase money, an outspoken passion for education, even though she herself never attended college.

Cliff came to Los Angeles in 2001 when he accepted a job transfer to Jillian’s City Walk where he would be a barback for one of its newly opened restaurants. For a while, everything seemed to be working out. He had a good job; he had plans to go to college—a personal dream his mother had for him. But by a dint of bad luck, Cliff suddenly found himself in jail, slapped with assault charges and facing 18 months in prison.

“It was the spring of 2005,” he said, thinking back on the night of his arrest. “I went to get some late-night ramen noodles at the Ralphs on Sunset Boulevard. That’s when I noticed these two guys harassing the cashier. They looked like junkies, and when I went to help her, they gave me this look. Pushed me. Started hitting me. So I hit back.”

As someone who frequently played sports and lifted weights, Cliff was a bit more than the two “junkies” bargained for. In defending himself, he put one of them through the sliding glass door, and that’s when the police were called.

“The cashier told the cops I was trying to defend her,” he explained, “but I ended up getting arrested on assault.”

Suddenly, Cliff was being offered a deal to plead guilty and do 18 months in prison.

“I was like, ‘you’re kidding me, right? This is ridiculous!’” he said. “They told me if I plead guilty with a strike, I would get out in 9 months; then they went on to say I would most likely get what’s called an early-kick, which meant I would be out in 4 months. I was shocked these laws even existed.”

But Cliff knew he hadn’t done anything wrong. He had simply defended himself; it was the “junkies” who attacked him.

“Where I come from in South Boston, you defend someone who’s being picked on,” he said. “It’s the right thing to do. It isn’t my fault I overpowered these guys when they hit me. But legal counsel told me I never should have gotten involved when I saw them harassing her. My final question to them was: if these two individuals had beaten me up and left me to die, then I wouldn’t have gotten in trouble? They said yes. And I said: but because I defended myself when they hit me, I’m the one facing prison time? Again, they said yes.”

Convinced that justice was on his side, Cliff declined the deal to plead guilty—“I know my rights; I’ll go to trial,” he told them, despite their warning that if he chose to go to trial he would be sentenced to double the time.

“Well, it was pretty simple,” he said. “The head prosecutor asked me if I tried to stop the guy by using force and I said yes. I was being honest. That’s what you do in a courtroom, right? You tell the truth?” He paused a moment, laughing quietly, maybe even bitterly, to himself. “I never should have said yes.”

Cliff spent the next four years in prison. He was told that with good behavior he would get out sooner, but that never happened for him.

“This was injustice,” he said. “Plain and simple.”

After Cliff was released on a work furlough in 2008, he struggled to find his footing. Most of the decent-paying jobs he was qualified for wouldn’t hire him because of his incarceration record. “They can’t do that,” his parole officer would tell him. “They’ll get fined!”

“But nobody ever fines them,” Cliff said.

It was several years of him taking odd, low-wage jobs before his record began to clear; he was eventually able to pass company background checks; he was able to get some decent work. But it was when he took a job transfer back to L.A. that he started thinking about college again.

“I finally had some decent jobs that paid well and gave me flexibility,” he said. “So I decided to try school one more time—my mom really wanted me to get a college education. She would always remind me that knowledge is power; she never let me forget it. And so in Fall 2017, I enrolled at PCC and began taking classes in the humanities and social sciences.” 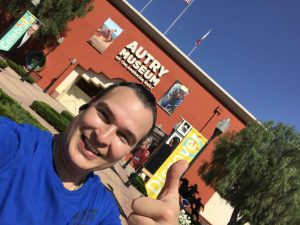 At first, Cliff didn’t have a reason for why he was taking these particular classes. He didn’t have a specific degree in mind. It was when he started thinking about why he was drawn to these humanities and social sciences classes, however, that he found the answer, one that was smack-dab at the intersection of his experiences with the legal system and the lives of the men he met in prison.

“I’d overhear people say things like, ‘People in jail should never be allowed to get out,’ or ‘If they’re behind bars, they deserve to be there,’” he said. “What’s funny is a lot of these people think that because I’m white, they can just say that in front of me, assuming it’s a safe space to voice that kind of opinion. Then they look the other way without ever thinking about what it is they’re saying or who they’re saying it to.”

It was his English 1A class at PCC that made him realize exactly why he was there in the first place. The class was reading The Great Gatsby, and Cliff was astonished by the novel’s discussion of income inequality, wealth and prosperity, and the disparities of social class.

“That was the turning point for me,” he said. “It made me realize that poverty is in our backyard. Social injustices are everywhere, and something needs to change.”

In addition to his two degrees, he works closely with PCC Sociology and Ethnic Studies Professor Anthony Francoso in the College’s CORE program, which provides support services to formerly incarcerated and system impacted students.

“CORE, which stands for Community Overcoming Recidivism Through Education, assesses the needs of each student,” explained Dr. Francoso, who also serves as the program’s coordinator. “We have students between 18 and 60 years old, a multitude of races, both men and women; we help them enroll in classes and apply for financial aid; we set them up with an advisor; we help them find work or get affordable mental healthcare. Each student has been impacted by the system in some way, and we help to support and empower them in their education as much as we can.”

According to Dr. Francoso, recent studies show that the recidivism rate lowers to 10% if the individual receives their associate degree, and it gets even lower—roughly around 6%—if they receive their bachelor’s degree.

“Unfortunately, a majority of formerly incarcerated individuals end up returning to prison because there are no good support systems for them when they’re released,” said Dr. Francoso. “The CORE program is that support system.”

“I got dealt a bad deck of cards,” Cliff said. “I was embarrassed about it—I am embarrassed, sometimes—but deep down, I know I didn’t do anything wrong. The CORE program helped me see that and to not feel ashamed. I was just trying to help somebody, and I got punished for it. And the crazy thing is, there are so many others who get dealt a bad deck like me.”

Cliff’s encounter with the legal system led him to reflect on his education in a way he hadn’t before. More than he realized, he had learned a lot during his time in prison about the levels of injustice many individuals face. Because several of his fellow inmates couldn’t read or write, he would help them write letters back home to their mothers or their girlfriends; often he would help them draft a letter to their attorney.

“A lot of them would tell me that the court was handing them papers to sign—but they couldn’t read,” said Cliff. “These guys were signing stuff without knowing what they were signing, and the system knew this!”

Knew. You could almost define the state’s legal system as an entity discriminating between those who knew and those who didn’t know, according to Cliff.

Given this new perspective, Cliff began sitting in on his classes in the humanities and social sciences with a keen interest in learning how to make a difference in the system that had failed him.

“There’s a lot of social injustice in the world right now,” said Cliff. “Just look at what’s going on with the LGBT community and Black Lives Matter. I definitely think I can help change the system so that the deck isn’t stacked against entire groups of people. That’s what my degree is going toward.”

College has given Cliff both the incentive and the courage to take control of his life and work to right a series of wrongs—wrongs committed against him and wrongs that are regularly imposed on others by a broken system. College has given him an opportunity to learn and to truly live out his mother’s philosophy: knowledge is power. In many ways, though, college has also been an escape for Cliff. For the first time in a long time, he found himself on a level playing field at PCC; he was equal; he was normal.

“I don’t mean to get emotional,” he said, “but that’s what kept me going these past few years. It was learning new things and realizing, Wow, I could really be something…I could really make a difference.”

Between 2019 and 2020, Cliff received three scholarships: the Robert Westerbeck Scholarship, the Former Incarcerated and Justice-Impacted Student Scholarship, and the General Osher Scholarship.

“I’m so grateful for everything the College and the Foundation have done to help me complete my degrees,” he said. “My mother, who sadly passed away about five years ago, would have been so proud to see me graduate this summer. But because of her, I’m going to keep going, keep thinking, and keep working.”

Bound for Cal State Dominguez Hills, Cliff is setting out to make a difference using the skills and the knowledge he’s acquired at PCC. At the moment, he’s considering a career in social services, where he would be able to work with people who have been put through the wringer of the justice system. Until then, he’s staying focused on his studies and dedicated to improving the world, even if it’s just by improving himself one piece at a time.