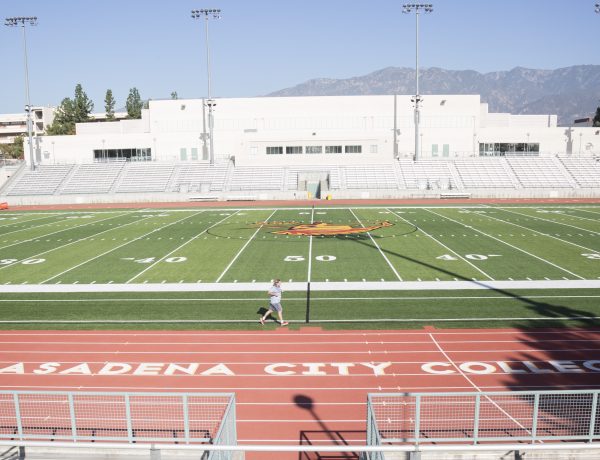 Returfing a Field of Dreams

Every year hundreds of local high school band members audition for the PCC Tournament of Roses Honor Band with the dream of performing along with PCC band members at Bandfest and walking down Colorado Boulevard as part of the Rose Parade.

It is because of this long standing friendship that the Tournament of Roses Association® pledged a major gift to the Foundation, which made the new field installation at the Jackie and Mack Robinson Stadium possible as well as continued support of music programs.

Previously known as Lancer Stadium when it first opened in 1999, the facility was renamed to honor the Robinson brothers in 2001. After years of wear and tear on the artificial turf and rubberized track, however, it became necessary for the College to update the field. Naturally, the Tournament of Roses Association offered its support.

“It’s a wonderful and time-honored tradition,” said Bob Miller, President and Chairman of the Board of the Pasadena Tournament of Roses Association®. “The partnership we have with the College is something I very much look forward to continuing. I’m a big PCC supporter for many reasons—what it does for students and the community is incredible. I worked at PCC for many years. My wife and I are both PCC alumni; I was interim superintendent president. Yes, I’m very happy to marry my two passions: PCC and Tournament of Roses.”

Thanks to the Tournament of Roses Association’s® generous donation, the Robinson Stadium is once again a multi-purpose athletics facility for the benefit of the Pasadena community and the music will fill the stadium before every Rose Parade®.