Why Ryan Newman Joined the PCC Foundation Board

For Ryan Newman, joining the PCC Foundation’s Board of Directors was not just a way to give back to her community, it was a way to advance the cultural perceptions—and combat the misperceptions—of community colleges altogether. 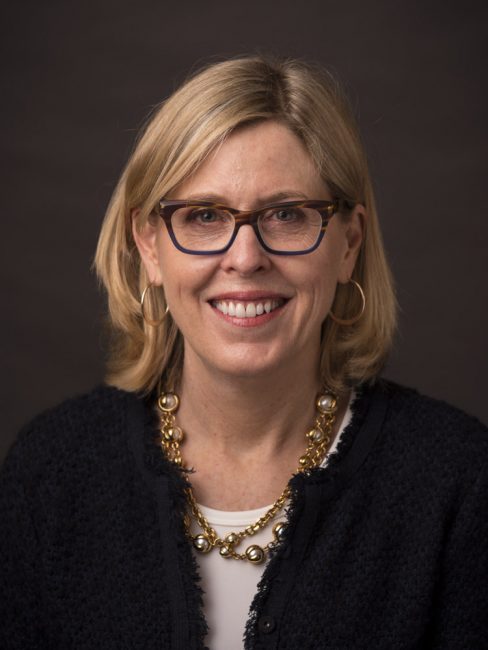 “My husband and I came out of the private college tradition,” Ryan said. “I had no experience with community colleges until my son decided to attend PCC.”

To Ryan’s surprise, PCC offered her son, Reid, a rich variety of educational and career opportunities he wouldn’t have had otherwise.

Reid, who is hearing impaired, initially enrolled at a small liberal arts college in Washington state after graduating high school. But he ended up back home after only one semester due to his disability. Frustrated and discouraged, he began to wonder what the next step should be for his education.

“That’s when PCC came up,” Ryan said. “Other than driving by the campus all the time, I had no familiarity with it. But after Reid enrolled, I began to learn from him and his friends that there’s this strong mandate for the UCs and the Cal States to make room for people who are transferring out of the community college system and into four-year schools.”

The significance of PCC’s high transfer rates and its accessibility of robust academic support services was, for Reid, a much more sensible, never mind a more affordable, path to a four-year school; it gave him the time to figure out what he wanted in terms of a college education, and it introduced him to people—friends and teachers—who had ideas and perspectives he’d never been exposed to before.

“PCC created a real opportunity for him in higher education,” Ryan said. “And it’s done that for so many others.”

This understanding of community colleges, while certainly not new to Ryan, is now at the forefront of her involvement with higher education, and it comes in part due to her frustration with the culture of private colleges.

Growing up outside of Boston, Ryan was expected to follow in the Ivy League tradition of her father. Her relatives had tremendous success in their lives, and it was largely because of their education. This value was passed down to Ryan and her siblings, and after high school, she attended Smith College in North Hampton, Massachusetts, where she majored in mathematics before going on to get her MBA at The Wharton School of the University of Pennsylvania.

But today, Ryan would tell you that the private college tradition is broken.

“There’s amazing private colleges in the country,” she explained. “But they’re too inaccessible and too expensive. It’s crazy to me that so many families are making choices that put themselves, and their kids, in extraordinary debt.”

Having come from this tradition herself, Ryan once held the view that college was for those who were on a specific career trajectory and who were ready to put their academic rigor to the test.

“I always thought you had to be on this particular path, with this particular goal in mind,” she said. “But after seeing what Reid went through, I realized you don’t have to have everything figured out in your 20s. There’s all kinds of people at different ages trying to figure it out.”

When former Foundation board president, and likewise Ryan’s longtime friend, Jim Sarni, approached her with the opportunity to join the board herself, she was all in.

“I’d been looking for something to give back to for a while, something to add meaning to my life,” she said. “And so when Jim came to me, I knew this was the right thing to get involved with.”

For Ryan, giving back to her community is more than just a calling; it’s a value that has become inseparable from her identity.

“It’s always been cultivated for me,” she said.

While on her way to Smith College, Ryan’s father made it clear to her that she would be expected to give back to her alma mater for the rest of her life.

“He explained that I was going to get so much more than what my tuition would pay for, and that I would need to support my college even after I graduated. I remember at the time I was like, Really?!” she said with a laugh. “But yeah, the idea of supporting education has always been a priority in my life, and it was made that way by my father.”

Though it was modeled for Ryan to give back to her community, it was also modeled that giving back was not a passive act.

“You were expected to do board work, yes,” she said, “but you did it in a way where you got your hands dirty. It wasn’t just supporting a fundraiser; it was going to city council meetings, preparing budgets, sitting on committees, all on a volunteer basis.”

When she first joined the Foundation board, Ryan was on the business council, which focuses on engaging business leadership into the economic & workforce development and career education efforts of the College. But it wasn’t long before she realized she wanted to learn more about what the Foundation did for students.

“At its core, the PCC Foundation provides scholarships and educational support,” she said. “And I was really interested in being part of that process.”

Today, Ryan is serving on the Foundation’s Scholarship and Student Success Committee, helping to develop a more comprehensive and accessible application process for students.

“Since Spring of 2021, we’ve taken a look at the entire application process, from start to finish,” Ryan explained. “We asked Kari Bolen, the College’s Chief Diversity, Equity, & Inclusion Officer, to sit in on our committee meetings and help us take out whatever bias we could from the application process in order to make it more accessible. And she really helped guide us and helped us rework the questions.”

The scholarship application now includes multiple essay prompts to choose from; it no longer requires fields of community service and/or extracurricular activities.

“A student can look at all that and think, I shouldn’t even apply, I don’t have any of that,” said Ryan. “But that student may be taking care of their grandmother full time, or maybe they’re a parent who doesn’t have time for things like community service. It’s about trying to find ways for students to give us all their information without discouraging anyone from applying.”

Through her involvement with the Scholarship and Student Success Committee, Ryan has been consistently moved by the stories of PCC students.

“I had this intellectual understanding of how hard it is for so many people,” she said. “But hearing students’ stories and meeting them in person, it really brings the reality to the forefront. There’s a lot of deserving people at PCC, and I’m glad I can be part of the process to get them the necessary resources they need to succeed in their education.”